Breaking down barriers in Cali

Posted on October 12, 2010 by childrenchangecolombia.blog

Whilst spinning across the dance floors in the famous salsa bars of Cali (salsa capital of the world we’re told) it is easy to forget the widespread poverty and problems that haunt the outskirts of the city. Yet another of the stark contrasts that exist in Colombia and indeed so many countries in Latin America.

Today we visited some those areas of Cali, home to high numbers of displaced children and families,

extreme poverty and regular gang activity; home also to much of our partner Fundación Carvajal’s work. Carvajal has over four decades of experience working with hundreds of low income children and families in the community, and boy do they know what they are doing. The most exciting part of their work has to be their focus on social inclusion for children with disabilities, and the smiles they put on all of those kids faces.

Poverty and technology in La Ladera

Our first stop was Ladera, one of the most deprived barrios (neighbourhoods) of Cali, reached only by following the bumpy dirt tracks that ascend the Andean mountains surrounding the city. We were admittedly rather shocked as we entered Carvajal’s community centre, and saw a shiny new safe haven for children in Ladera, bursting with top of the range computers, musical instruments, puppet shows and play areas. What child wouldn’t love this place?

Carvajal strives to break down the barriers that poor and displaced children, and children with disabilities face on a regular basis. The wonderful thing about their community Centres is that absolutely anyone from the area can enter whenever they like.

One of the barriers that vulnerable, disabled and displaced people in Colombia face is the total lack of access to technology and therefore job opportunities. In Ladera, and in many of Carvajal’s community centres, children and young people could spend all day surfing the net, accessing online education programmes, and emailing, whilst widening their knowledge of IT increase their employability. The computers are also complemented by special equipment for deaf and blind children, and it’s just a fantastic example of how technology should not and does not exclude anyone.

Folklore and gang activity in Aguablanca

Excited by what we had seen in Ladera, and the work of Carvajal, we were eager to see more of what they had to offer. As we hit the sprawling slums of Aguablanca, Cali’s poorest district, the poverty and deprivation became increasingly evident. Aguablanca has one of the highest numbers of displaced people in Colombia and also suffers from widespread gang activity. Another reason why Carvajal’s work there is so crucial.

El Vallado in Aguablanca is one of Carvajal’s biggest community centres, and welcomes children from all over the district. 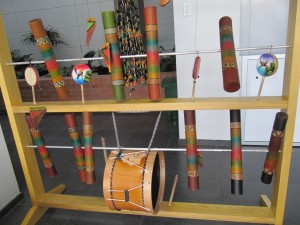 Today was a special day for the Centre as the children were performing their first folkloric music and dance show to the community, something that Children of the Andes has helped to fund. Playing the drums was Diego (8), whose short spinal cord has meant his legs haven’t developed, Lenny (13) who has previously lived on the streets, Mauricio (15) who has Down’s Syndrome, and lots of other kids from the community with no disability at all. Dancing were girls and boys with downs syndrome, deaf and blind children, and many of their family members and friends. What a pleasure it was to see so many children enjoying the moment, unaffected by their physical and mental differences, and past history.

After the performance, the kids and young people were on such a high they ran around hugging and kissing everyone they knew, with pride beaming across their faces. There was such a wonderful sense of community, and love for life at el Vallado, despite its location in one of Colombia’s biggest and poorest slum areas, and the difficult lives that the families and children have. It’s strange how the atmosphere at el Vallado has a similar buzz to the salsa bars we were in on Saturday night…

Carvajal – there’s so much to say!

There is so much to say about Carvajal and the incredible work the foundation does getting children with disabilities into mainstream education, working in areas where young people are at such high risk of gang involvement, providing hundreds of pre-school kids with a safe-haven and their parents with an opportunity to work… We could go on forever.

Please visit Carvajal’s website or Children of the Andes‘ lovely new website for more information. We’ll be adding to what is there over the next few weeks!

Thanks for reading… and buenas noches (good night)!
Hannah and Emily