Talking to Adolescents about Sexual Abuse

Posted on September 18, 2014 by childrenchangecolombia.blog

This article was written by our Field Officer for the southern region of Colombia, Heidy Araque.

Last week my colleague Johanna and I visited the Child and Youth Friendly Healthcare Service (CYFHS) that is being piloted by COTA partner Fundación Si Mujer this year in Cali. That afternoon, the CYFHS was hosting a talk to young people on the issue of Sexual Violence.

The group of about 25 adolescents arrived accompanied by a school teacher. Unusually, only two of them were girls, the rest of them boys. They all wore their school uniform. The CYFHS welcomed them, explaining that the CYFHS was being developed in collaboration with other young people like themselves. She explained the range of services offered at the CYFHS, the agenda for the afternoon and then introduced Si Mujer’s psychologist, Ana María. 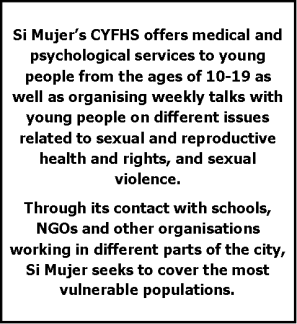 At first, the young people were a bit giggly, embarrassed with the topics. Ana María started the talk by sending around some rag dolls for us to look at. She encouraged the young people to tell the group what was different about them. Some young people pointed out that they actually have genitals, unlike the rag dolls we were given as children. These dolls (male and female) were a way to remind us that sexuality is mostly a concealed issue but we were going to talk openly about it that afternoon.

By this time, the young people had opened up and felt more confident in giving their views and asking questions. The discussion that followed included reflections on the fact that sexual abuse often occurs at home or at school, which are generally considered “safe places”. Abusers are often people that you know and are supposed to trust. Ana María shared some insights from her 18 years working with survivors of sexual abuse.

She clarified that sexual abuse can also happen without physical contact; for example if being watched while undressing, or forced to see the abuser’s genitalia. This sparked some interesting questions and made us all think about the matter in more depth. She mentioned that although men are also sexually abused, much of the abuse still happens to women and girls. She asked young people to reflect on that. She encouraged young people to ask questions and to seek help if they had experienced sexual abuse or know someone who has, even if it was many years ago.

Ana María explained what is included in emergency care after rape, discussing the risk of contracting STIs or an unwanted pregnancy. She also explained that in Colombia, if rape results in pregnancy, it is legal to terminate it.

At the end of the session, young people were offered the chance to have a consultation on contraception in groups of three. Many of the young people took the opportunity to go ahead with the consultation and learn more about what is available to them.

At the end, I felt it is so important and valuable for young people to have opportunities like this, where they can ask questions and obtain trustworthy information about these important issues. I’m very proud of how the pilot is going and can’t wait to see what more can be achieved over the next three years!

Thanks to everyone who is helping so that this work is possible.

To help continue this work to empower children by helping them understand their rights, please make a donation today.

This entry was posted in Uncategorized. Bookmark the permalink.